In response to recent COVID-19 concerns, we are writing to assure our clients that we are taking recommended precautions.

Would you like to switch to the accessible version of this site?

Don't need the accessible version of this site?

We value our clients' experience at The Pet Dentist. If your pet or animal is currently a patient, please feel free to complete the following Client Experience Questionnaire. The Questionnaire is in Adobe Acrobat format, and requires the free Acrobat Reader to view.

Read What Our Clients Say

Word of mouth referral , or the recommendation of a friend has always been the best kind of accolade. At Tampa Bay Veterinary Dentistry, we want customer satisfaction, whether it is the referring veterinarian or the pet owner, to be one of our barometers of success. Listed below are some brief recounts of past cases and comments from their owners:

Dr. Peak has provided dental care for our two Sphynx cats, Wee Willie and Cat Balou, for most of their fifteen years. We have always appreciated his methodical caring approach, and his detailed written explanations of test and procedure results. Because of Dr. Peak, the cats have always had good dental health and each exam always ended with a review of their examinations and scheduling a follow-up exam.

The last time was very different. During his examination, Dr. Peak had found an unidentified growth under Cat Balou's tongue, which he removed and sent to the lab for analysis. Eight days later, the biopsy results showed the growth to be a squamous cell carcinoma and that the cancer had extended beyond what Dr. Peak had been removed. Dr. Peak explained that if the carcinoma had already metastasized in Balou's lymph nodes or lungs, there would be no benefit to further surgery as Balou would die in about three to four months because the cancer had spread too far. But, if the lymph nodes and lungs were clear, complete removal of the carcinoma would be necessary if Balou was to survive. He also explained that since the growth was relatively large in relation to the size of the Balou's tongue, it would probably be necessary to remove part of the tongue to assure that the growth was completely removed. After examining Balou's lymph nodes and an x-ray of his lungs and finding them clear, Dr. Peak removed the remaining cancerous growth along with part of Balou's tongue that day.

Upon awakening from surgery, Balou began chewing on his remaining tongue and would only stop when his mouth was held closed. To prevent further damage to Balou's tongue, Dr. Peak temporarily bonded his teeth together and placed an E-tube in his neck so that he could be fed by injections of cat food and water into the tube.

Balou went home and initially responded well to the food and water being fed by injection but three days later, he became lethargic and developed foul breath. At 9:00 one night., we returned him to the Emergency Care Center, where it was found that part of his remaining tongue was now dead tissue. The Center called Dr. Peak at home, who came immediately to the hospital to examine him. Balou's antibiotic medication was changed and he was allowed to return home. Three days later, the tooth bonding was removed and the remaining dead tissue was trimmed away from his tongue.

Balou returned home and did remarkably well. The tongue returned to its normal color and the bad breath went away. He would hop upon the kitchen counter and wait to be fed and watered through the E-tube. He now looked and acted like a much younger cat except that he had a colorful bandage around his neck and a 5-inch feeding tube dangling from it. The only problem was that he would not eat or drink on his own and we began to accept that we would be feeding him from a syringe for the rest of his life.

When we returned with Balou to Dr. Peak the following week, Dr. Peak told us that he had talked with another veterinary dentist who had treated a tiger with a similar problem. He then rubbed canned cat food on the roof of Balou's mouth and Balou immediately began to eat. Later that day, Balou was taking all of his food by mouth and was drinking water on his own. A few days later, his feeding tube was removed and he is now living the life of a normal house cat but with the energy of a kitten.

Balou is alive today only because of the knowledge and intensive care provided by Dr. Peak and his associates, Connie and Jeanne. We cannot begin to express how grateful we are to each of them. 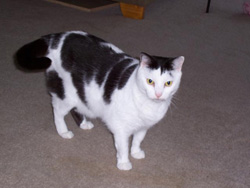 Our cat "Hope" was diagnosed with Stomatitis. We could tell her mouth was uncomfortable and it was a struggle to get her to eat. She lost several pounds and was miserable. Hearing that one option is to pull most or all of the teeth as a possible solution was scary. We tried the medicine route first, but that did not work for her. She was getting worse.

After consulting with Dr. Peak, we decided to pull most of her teeth. You and your staff were so kind and knowledgeable that it made us feel much better about this step. It was definitely the right thing to do. "Hope" has since recovered, gained weight, is happy and playful again and eats canned and dry food. Thank you for helping us save our sweet "Hope."

“Mickey” presented to us for repair of a very large opening in the roof of her mouth suspected to be caused by having a stick lodged between her teeth in the roof of her mouth. She was a rescue and had two previous unsuccessful surgeries to close the defect. Her photographs can be seen on the Oral Surgery webpage. When she ate, food and debris would enter her nasal cavity causing chronic nasal infection and risking pneumonia. She was unable to eat/consume food normally and was losing weight rapidly.

“I cannot say enough about the dedication of the people at the clinic and your dedication to the wellness of helpless animals. Also the kindness you show to “us” pet owners… From the time we arrived at the clinic, Mickey was treated as she was the most special dog in the world… Today, four months later, Mickey is eating on her own…has gone from 7lbs to 11.5lbs and has been given a second chance at life by you, Dr. Peak and your associates. All I needed to add was love and lots of food.”

“Biscuit” presented to us after having unexplained episodes of possible pain and would run and hide under a bed. Her suspicious behavior seemed to be localized to her mouth as determined by her referring veterinarian. Initially, diagnostic dental x-rays were inconclusive, but eventually, the tooth abscess became apparent and the problem was remedied.

“I want to express our sincerest appreciation for the wonderful “beyond the call” care you have provided us for “Biscuit”. She is herself again – playing with her toys and no longer hiding under the beds. You and your staff are truly exceptional people – professionals! You receive our highest recommendations.”

We cannot thank Dr. Peak and his staff enough for everything they did for our cat “Bud Jr.” and for our family when he was diagnosed with Squamous Cell Carcinoma. Dr. Peak was very upfront and honest with us about Bud’s chance for recovery, and he was extremely compassionate towards our daughter who is very attached to Bud. When we made the decision to go ahead with the surgery, Dr. Peak and his staff were wonderful about letting us know want was going on every step of the way. When we brought him home, they were very supportive and gave us all the guidance we needed to carry out the daily procedures he needed during his recovery. It has been almost a year now since Bud’s procedure, and thanks to Dr. Peak’s expertise and the will of God, who we know guided us all, Bud is doing great. We are enjoying every moment with him. All we can say is thank you Dr. Peak for giving us this wonderful gift.

Find us on the map